The Wakefield Lynnfield Chamber of Commerce will hold its annual meeting on Thursday, June 6th at Four Points by Sheraton in Wakefield, beginning with registration and networking at 5:00 p.m. The evening will include a welcome at 6 p.m. followed by dinner at 6:15 p.m.

Guest speaker Doug Meehan of WCVB -TV will begin his remarks after the dinner followed by election of officers and directors, and the presentation of several awards to recognize businesses and individuals who have had an impact on businesses and the community.

The annual James E. Chisholm Leader in Business Award will be awarded during the evening to recognize the value of dedicated business leadership. This annual award is presented to a business leader by the Chamber in memory of the founder of JC Marketing Associates who died in 2012. The recipient exemplifies the spirit of Jim’s generosity, guidance, and support of local business and organizations. In addition to the Leader in Business Award, the Chamber will present a Business of the Year Award and community awards.

The annual meeting is open to members and nonmembers alike. The cost is $45 per person for members, $50 per person for non-members and includes dinner. A cash bar will also be available. Reservations are required and can be made by calling the Wakefield Lynnfield Chamber of Commerce (781) 245-0741 or via email at john@wakefieldlynnfieldchamber.org.

For two years prior, Doug was host of “The Doug Meehan Show” on Boston’s WTKK 96.9 FM as well as a contributor on The Wall Street Journal Radio Network in New York.  And for more than six and a half years before that, Doug was a highly-acclaimed reporter and anchor at Boston’s WFXT-TV where he was the market’s first full-time helicopter reporter covering traffic as well as breaking news.

Prior to that, Doug worked at Boston’s WHDH-TV as a reporter and relief anchor.  For six years before that, Doug worked as an anchor and host of “Good Morning Texas” at WFAA-TV in Dallas, TX; a reporter at KTVT-TV also in Dallas; and anchor at WTSP-TV, Tampa, FL and KEYE-TV in Austin, TX.  Before leaving New England, Doug was a news, weather, and sports anchor at WPRI-TV in Providence, RI, and prior to that he was a reporter at New England Cable News.  He began his news career as an anchor and reporter at Cape 11 News in South Yarmouth, MA.

Doug was honored in 2006 by Boston Magazine as one of Boston’s “The Fabulous 40,” and also that same year, he completed the 110th running of the Boston Marathon.  Doug grew up in West Yarmouth and attended Dennis-Yarmouth Regional High School.  He attended Westfield State University in Westfield, MA where he received his Bachelor of Arts in Communication. 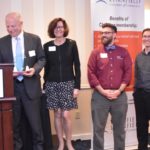 Coleen Getty with Room to Write receives New Business of the Year Award.